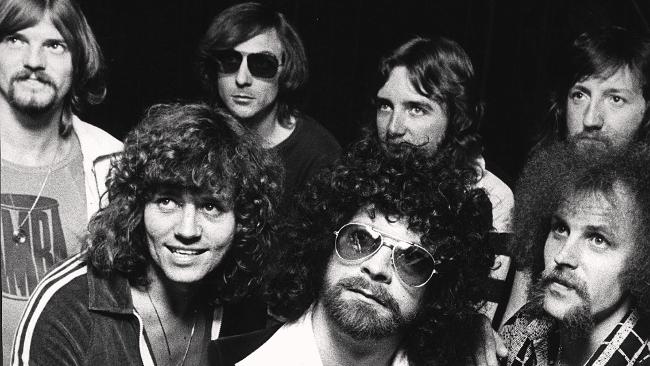 It’s midday. And winter. And February. And this is my first post (of 365). I am writing about ELO’s 1976 45 “It’s a Living Thing” because ELO was the first rock concert I ever went to, down at the old aluminum footballbaseball stadium in Toronto, which is where I live. For their show, ELO came out of a giant spaceship– the lid lifted to reveal them in embroidered jumpsuits– and whether it’s the reason I was allowed to go to the show, I don’t know. ELO was probably a safe choice for my parents, partly because of Jeff Lynne’s Nutrasweet vocals, partly because they sounded like The Beatles (mostly “Hello, Goodbye”) and partly because of the cellos, violas, and violins, which, weren’t exactly the MC5 or Grand Funk or The Who, who had concerts where kids died. ELO were British sunnyglampop– even “Evil Woman” wasn’t very evil– but they possess a memory for me of the time before I grew wary of popular songs or bands who wasted their energies designing touring spaceships, although, on paper, the idea does seem kinda cool. The beginning of the song has a gypsy moment– with a bt of Ferdinand the Bull at the end– before the twelve-string scrubs and the snare Motowns on the two-beat and, eventually, the chorus rushes through to sparkle the air. After a moment, the gypsy part returns– Jeff Lynne sings “I’m baking to die!” although he’s probably neither baking nor dying– before giving way to more verse and chorus, which, when they happen, always remind me of the Travelling Wilburys, and while some of you can argue against this being a good thing, you’re just going to come off sounding like a dick. There’s another gypsy part– filled up with drums this time– and a chopping cello line in the last chorus, and if you don’t think I like chopping cellos in choruses, you don’t know me (which, for many of you, may well be true). While I was listening to the song walking out in the terrible cold stomping over snowbanks and pressing down on my headphones, I noticed another thing: there’s a cowbell that comes in at the very end. It’s okay with me.

2 thoughts on “Space is the Place”